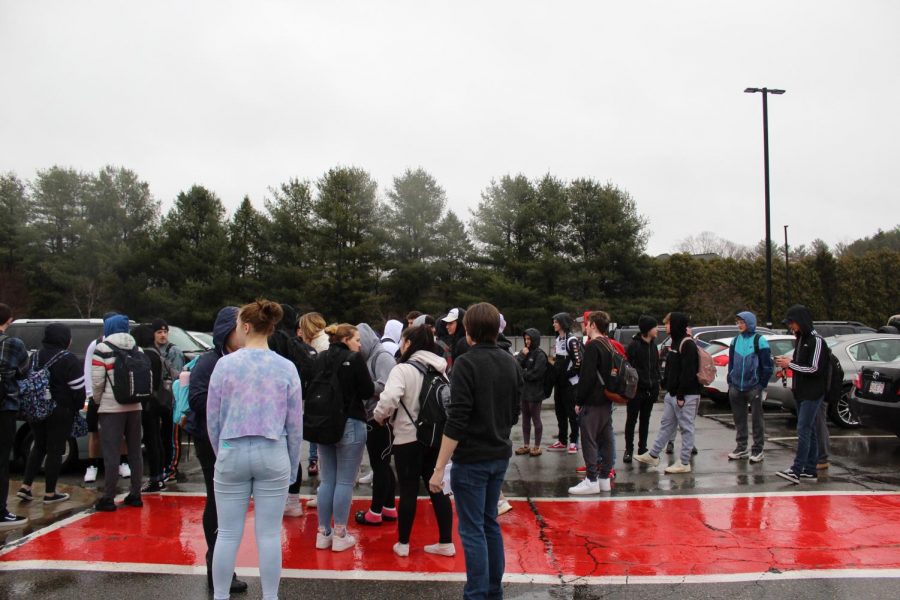 Students stand in solidarity after leaving the school

Walking Out Over Coronavirus

Students walk out in Protest over Coronavirus COVID-19 Concerns

Upwards of 50 students walked out in protest from the building at 9:40 a.m. today. Planned on students’ Snapchats at the beginning of the school day, different grades came together to show their concern for their safety due to COVID-19.

“Our purpose of doing the walkout is so that we get more communication with the school,” sophomore Bella Campbell said.

“Many schools are closing or are doing online school, the NBA in the NFL are both shut down temporarily, our sports are all being postponed till the end of the month, the reasoning for the sports was that we were informed we can’t do sports right now because there are more than 50 people in the activity,” Campbell continued.

Even those who didn’t directly participate showed an interest in the situation.

“I am not sure (if it will actually work),” senior Bailey Watts, an observer of the protest said, “I think it will put some pressure on the administration.”

“Students certainly have a right, a federally protected right for free speech that includes demonstration, it’s an important thing,” Principal Jason Medieros said, “But that doesn’t mean students can do whatever they want during these times, the most important thing is that students are safe and that order is restored and that expressing your right to free speech especially in the context of school comes with responsibility.”

Though many were unsure if anything would actually come of the Snapchat posts many watched to see the results.

“I see some doors opening,” Watts said during the beginning of the gathering, “People may be actually leaving.”

They did, those who have cars were able to leave, several underclassmen walked out then came back in, but those who stayed outside had to stand out in the rain.

“A lot of people are saying that we did this just to skip school,” senior Sinead Resendes said, “But that’s just not the case at all. We started it because we thought it didn’t make sense that they could cancel our Senior vs Faculty basketball game and Peter Pan because it was a state of emergency and they couldn’t have more than 50 people at one place, but then we have school where we have over 800 in the same place.”

Some students saw this in the protests.

“It shows that people are upset,” senior Samantha Gogan said, “I mean it is our right, No other school district is open right now.”

The concern carries through to the health of peers.”The reason we want the answers and the reason we need the answers is for safety,” Campbell said, “Not even just for ourselves but for all of the students.”

“One of us could be a carrier,” Gogan added, “I have friends who are immune-compromised.”

“I work at BJs and it was a crap show; there were lines out to the deli, I touched everything. If someone went to BJs and has it then I have it now,” said senior Ben Chaves.

Though teachers also expressed their concerns, some felt that it was poorly planned and made a stressful situation more chaotic.

“I think it’s a little silly for today,” Special Education teacher Jessica Byrd said, “But they have a right to feel how they want to feel.”

Several parents called in to ask if their students were present when they heard about the walkout over social media. Some parents dismissed their kids from school.

“We are going to sit back and look at our attendance,” Principal Medeiros said, “My priority right now is to identify which students left campus for the day so we can notify parents that students are not in school right now.”

Despite possible consequences, students still walked to voice their concerns and show just how important this is to them. Campbell expressed this issue is greater than just missing school.

“The students that did the walkout today really just want safety for us, the people around us, and everyone in the town,” Campbell said.