Destruction in the Parking Lot 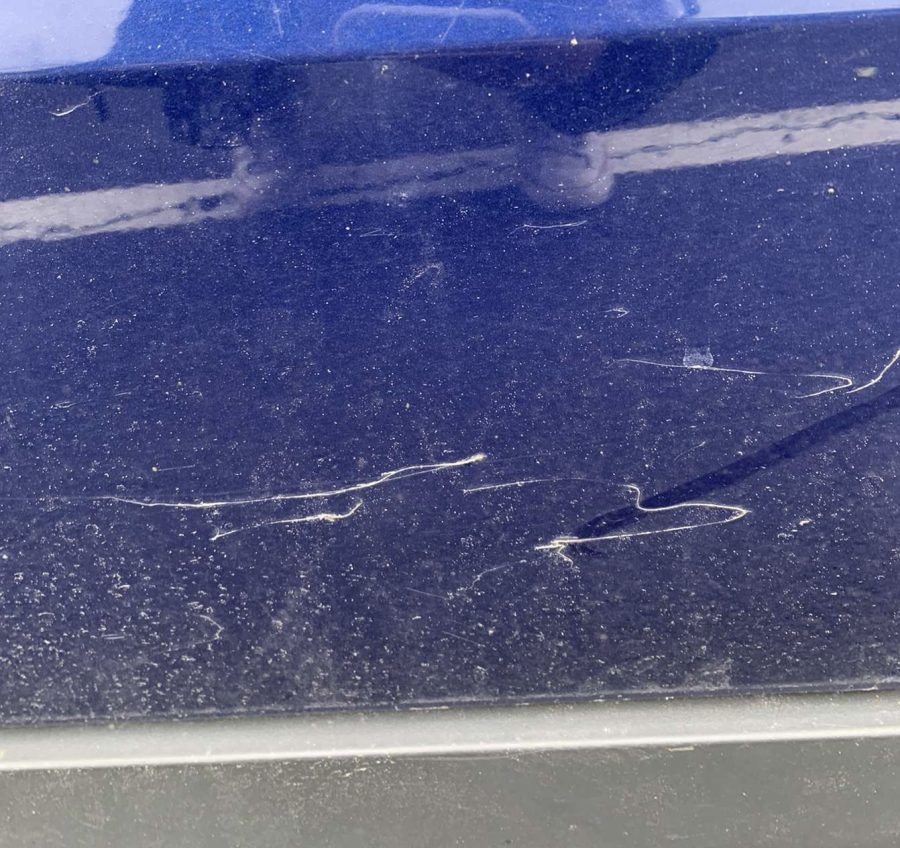 One of the cars in the that was vandalized yesterday. Damage varied from minor scratches to substantial gauging damage to cars bodies, headlights and rims | Provided by Brianna Devlin

Dozens of cars in the Hudson High School parking lots were keyed, smashed, and vandalized by an unidentified perpetrator(s) yesterday, Thursday, April 7. Principal Dr. Jason Medieros took to the loudspeaker to announce the happenings.

Medieros stated ”If anyone arrives at their car this afternoon to find this happened to them, please find an administrator so that we can take a picture and include it in the report with the Hudson Police Department. We are working with the Hudson police to investigate this incident.”

Junior Anna Helble stated, “I feel like people just don’t realize that this is real life and that there’s consequences to actions… People are so used to just being able to do whatever they want and not having any consequences for that.”

“People work hard to buy their own cars and parents even get new cars so their kids have their cars. The fact that people are just tossing a key around and keying cars and they don’t even know who the people are… that’s just insane to me.” Andrade concluded.

This isn’t the first time items have been vandalized on school property. This school year, there have been toilets in the male bathroom smashed and ripped off the wall as well as other vandalistic incidents.

In an announcement, Medeiros stated, “This is your school and your community. We have had challenges this year that I thought we had overcome. “

He continued, “Recently, we have experienced a step back in these efforts to work together as a community. Whether it is in the classroom, the cafeteria, the bathroom, the parking lot, we all have the responsibility to act with the community in mind. Selfish acts, like vandalizing vehicles, throwing food, and leaving trash in the cafeteria and bathrooms, destroy the respect that we work to build every day. We will work to hold students accountable for these and all behaviors that violate the handbook and disrespect the community.”

Many students ended the day anxiously rushing to the parking lots to check their vehicles for potential damage. For those whose cars were damaged, many were visibly upset.

“…I hope the people actually get punished because sometimes this school doesn’t punish people the way they are supposed to…” said junior Bella Morais.

The perpetrators may face felony charges once identified due to the sheer amount of vehicles damaged.

Detective Shamus Veo, the school resource officer, commented about the situation. “This is under investigation but we will get to the bottom of whoever did this.”

As the investigation continues, the majority of students affected cannot believe this could be done at their own public high school.

Senior Alex Crogan has said he feels disgusted by these events, “To work countless hours to be able to buy your own car, and then see that it’s been keyed makes me absolutely disgusted.”