Fighting to the Whistle 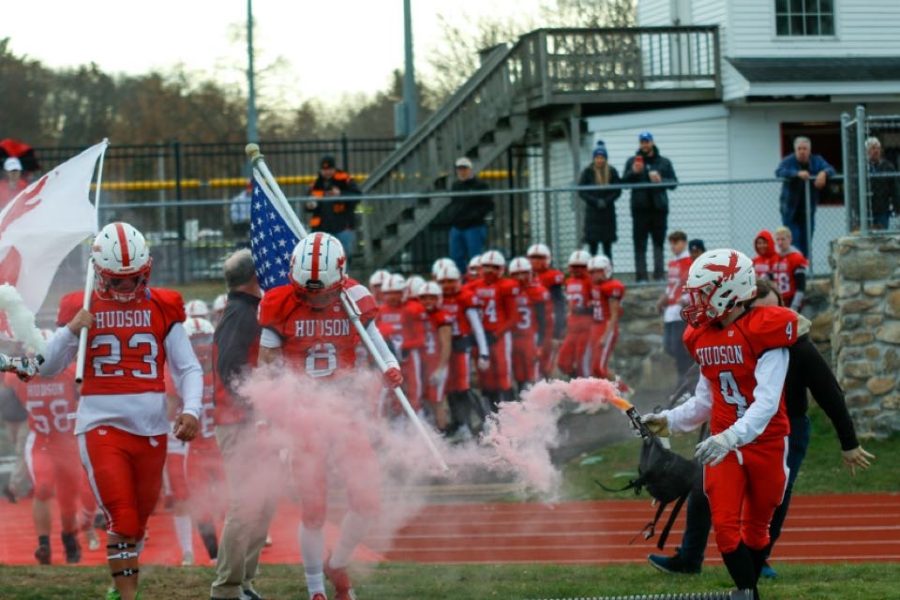 What do seniors Quinn O’Brien, Marcus Bass and freshman Jake Attaway all have in common? They made state All-Stars, including O’Brien being awarded MVP of the All-Star League.

This triple achievement follows one of the most successful seasons the Hawks have played this millennium.

One thing you’ll notice about the players in the halls, is they stand a bit taller and they hold their heads a bit higher. Perhaps, it’s because it has been eight years since Hudson High Football has made it to Playoffs.

“The energy this year is very different. Everyone wants to win, and we have great leadership with the players and coaches. The past few years haven’t been the greatest, and it’s nice to finally win,” said junior Ty Mullahy.

The energy on the field mirrored the fan section throughout the school hallways, pep rallies and bleachers that came alive with enthusiasm.

“I think since we went on such a huge run making it to the second round in yoffs [playoffs] even with losing to a good team. We got our spirit more hyped as more people wanted to come to watch, even if it meant driving an hour to away games,” said junior Lucas Pessoni, Red Sea fan.

The first win against Clinton started the season off with a bang. But it was win after win that transformed the team to a successful one in their division, making it to the playoffs.

“The first win against Clinton went very well. As a senior captain I felt like that win made us come off as a strong start with a winning record,” said Arthur Jardim

“The team’s success brought us all closer. And I think the difference between this season and the past seasons is that we will fight to the whistle and keep playing no matter what,” said senior Joel Burgos

Many team members have said that they have the best quarterback that they’ve had in years. After uncertainty last fall during the pandemic, a short spring season with a losing record 1-5, they improved this fall with freshman phenom quarterback Jacob Attaway.

“The 15-year-old quarterback, who doesn’t even have his driver’s license yet, has steered the Hawks offense to an average of 24.4 points per game. The 4-1 record is Hudson’s best start through five weeks of a season in over half-a-decade.” said the Metrowest News said, five weeks into the season.

Following a Covid-19 season, last year that left the stands empty, being in person has brought the school to life, especially with the energy in the fan section. This season, multiple students and parents were able to stand together on bleachers to cheer on the football team.

“It was exciting to be back, not having this be a part of my high school experience last year definitely cut down on how close I was with my grade and those around. The Red Sea coming back together helped represent our school, making our bond stronger,” said senior Emanuelle Fernandes.

Now with the season over, the team anticipates next season, while reflecting proudly on this one.

“I think the team’s success brought us all closer. And I think the difference between this season and the past seasons is that we will fight to the whistle and keep playing no matter what,” said junior captain Caleb Luz. “It feels great to be part of a historic team that people from Hudson won’t ever forget.”