Getting to Know Ms. Hilton 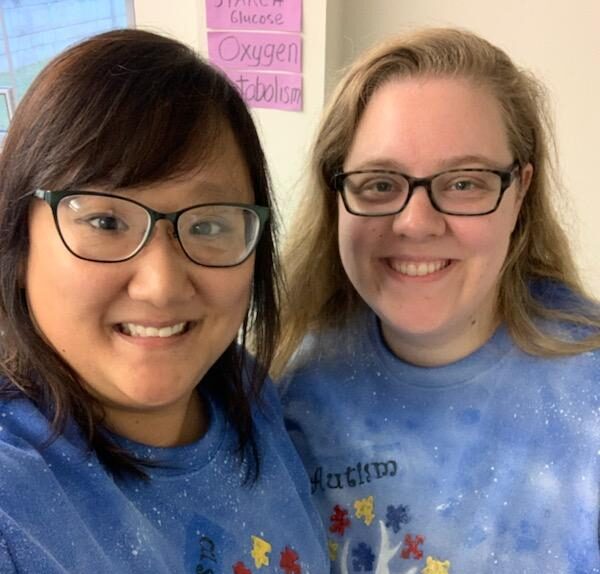 Whether she’s carefully crafting fun bulletin board designs or walking the halls of Hudson High in a math pun t-shirt, special education teacher Kimberly Hilton knows how to put smiles on students’ faces.

When asked if she likes her job, Hilton replied “I do! I love this job.”

“When I was younger I always wanted to be a teacher, but when I went to college I thought I wanted to be a preschool teacher,” Hilton admitted. “So when I applied to college I did early childhood, and then I was actually put in the wrong orientation group at college, and they were like ‘oh, you should do this, your special ed degree will be Pre-K to eight, it’ll be better for you, it’ll be easier to get a job.’”

“I was a math teacher first,” Hilton said. “When I started teaching math, I really liked working with kids who needed more support, so that’s where the special ed came in.” 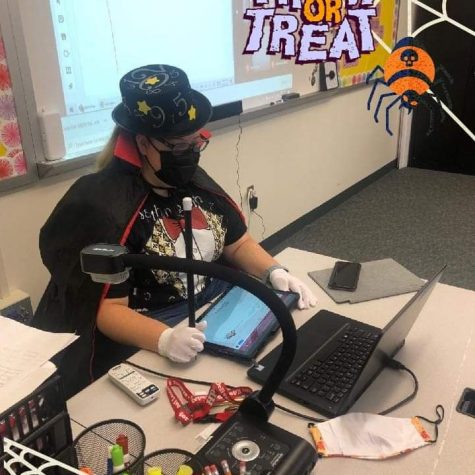 A Fitchburg State University graduate, Hilton is now attending graduate school at Worcester Polytechnic Institute. “I’m supposed to be finishing now… I have to do a project, and I have to collect data, and it’s really hard to collect valid data during Covid,” Hilton explained. “I’m done with all my classes, I just have the project, and the project is probably going to be implemented in the fall, so I would technically get my degree at a fall graduation type deal.”

While Hilton now teaches high schoolers, she still has a passion for working with younger kids and works with them at a summer camp. “I’m an assistant director of the Leominster Recreation Department Summer Program, so now I’m in charge of all the groups. I kind of climbed up and down towards the top of the food chain over there.”

Within her busy schedule, Hilton still makes time for her hobbies. She spends a lot of her free time outside of the classroom with her family. “I live with my younger brother, who’s also a teacher,” Hilton said. “we’ll correct together and do different things together.”

“I live with him, and then the rest of us get together on weekends and try to bond and hang out. We’re pretty close.”

“I have a big family…I have four brothers…” Hilton said. “Ever since everyone’s been vaccinated and everything, we get together and we do a lot of board games and stuff like that.”

Something that Hilton and her brothers bond over is movies. “Since I live with my little brother, he’s very much into Marvel, so we’ve been doing a lot of superhero-type things, like the new series on Disney+, so there’s the winter soldiers, Captain America, and then we were watching WandaVision.”

“When I was younger I would try to go to the movies with my brothers, specifically not watch any trailers or know anything about any of the movies that were coming out, and then we would go up to the person who was selling the tickets, and say ‘just give us a ticket’.”

Another one of Hilton’s hobbies is doing DIY projects. “I like doing arts and crafty things,” She said. “My Cricut is pretty cool. My dream is to make more nerdy math shirts – ‘cause you know my math shirts – I’ve been buying a bunch on Amazon, which is probably not good for my bank account.” 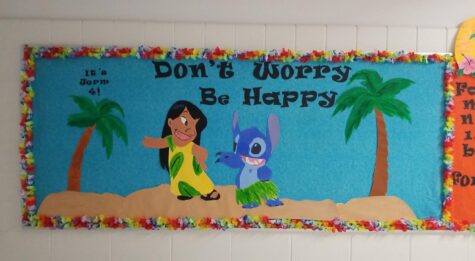 Hilton also utilizes her artistic skills to better the Hudson High community. In the art hallway, a bulletin board featuring Lilo and Stitch is displayed, something Hilton created with students after having a conversation with them about stress. “Some of my academic support kids were helping with it too, we were trying to make it a positive vibes type of thing.”

Hilton’s talent is also being spread to other Hudson public schools. “Mr. Medeiros was talking to me, and he was like ‘when you’re done, can I have it?’ because they want to send it to Mulready, so I’m going to try and make it laminated so they can put it together.”

“I like to make things and display them for people,” Hilton concluded with a smile.