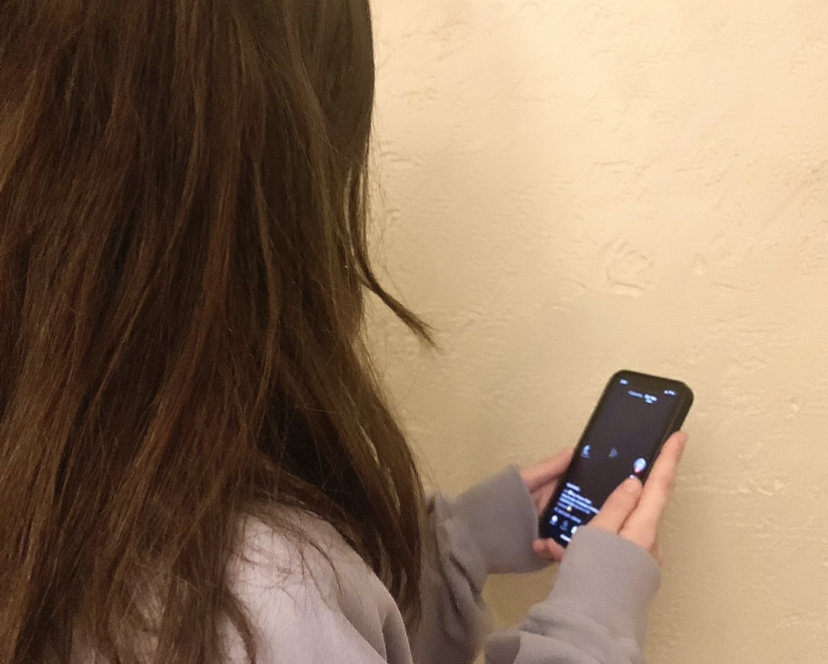 A HHS student scrolls through TikTok | by Sarah Marshall

**This article contains the topics of eating disorders and harmful diet culture. Reader discretion is advised.

Over the course of the pandemic, TikTok has brought comfort and entertainment to distract from the events of the world. Despite this, it’s hard to ignore one of TikTok’s most prevalent, damaging subsections: the eating disorder community.

With 689 million users worldwide, TikTok is one of the most popular social media platforms right now.

Videos detailing what a user eats in a day and “body-checking”, a tendency to look at and compare your body to others, can often be found on TikTok’s for-you page.

While these types of videos may not seem dangerous, diet culture is rooted deep within them. “What I Eat in a Day” videos often show users eating less than 1,000 calories a day (the minimum recommended amount is 1,200). Videos of thin users body-checking are plagued with comments of other users wanting to look like them.

Breana Alonge, a junior, says she sees these types of videos frequently. “Usually they’re girls who are posting in a bikini or they’re posting in workout clothes or posting workout routines…or what I eat in a day,” Alonge said. “Very specific to diet culture, in my opinion.”

Dania Mael, a senior, agreed. “There’s really no other reason to show how little you’re eating in a day besides giving yourself your own validation.”

“I’ve seen people actually recommend vomiting after eating so they can lose the weight they gained from the food,” Marcos Godoy, a sophomore, said, recalling a comment on a video of what a user ate in a day. “They were mostly jokes, but people were using these jokes to talk about how they were actually doing that.”

Mael also expressed worry towards users who may be more susceptible to eating disorders, and have the mindset of “She looks really skinny, I’ll do that now” when seeing these videos. “It affects people who are really vulnerable.”

This sort of culture has become normalized on TikTok. It’s rare any video about food won’t have comments detailing eating disorder habits, even if the video is completely innocent of any diet culture.

Godoy recalls comments of “people saying they haven’t eaten in days because they want to be a ‘skinny queen’.” While the execution of these comments is comedic, users have expressed how harmful they can be.

“My little sister uses it who’s only ten years old,” Alonge said. “TikTok has an audience of all age groups, so I think it’s a very horrible thing.”

Mael also spoke of young audiences being influenced. “Especially knowing that there’s a really young audience on TikTok that can come across it, that’s really scary.”

Despite all of the promotion of eating disorders on TikTok, there is also a community that supports eating disorder recovery. Molly Fahey, a senior, talked about these videos she sees on her for-you page.

“They’re more about recovering from eating disorders and feeling proud of yourself for being able to recover and feel good about yourself,” Fahey said. “Overall, what I have seen is a very kind group that encourages progress and getting back to being healthy.”

“I think it can definitely create some disordered eating,” Mael said. “Or it could make it worse for people who are already struggling with it.”

Much of the time, users will come across displays of eating disorder culture without having to seek it out.

“Many times when I’m just scrolling through videos, it’s just a normal girl posting a video, and somebody’s like ‘Oh, I guess I’m not going to eat today'”, Alonge said. “Yes, you have this insecurity and you’re upset about it, but you need to keep that to yourself because it’s hurting other people.”

Despite users’ efforts to stop these videos from appearing, TikTok will still recommend them. “I clicked ‘don’t show again’”, Mael said. “I still see it kind of frequently…I definitely see it more than I should.”

However, these measures clearly haven’t diminished the eating disorder culture that runs rampant on the platform. Many users will also put ‘trigger warnings’ on videos about eating disorders, but some argue these warnings are not effective.

“I’ve seen people put trigger warnings on their videos, but also, the comments kind of need one as well,” Alonge said. “I’ve seen videos with girls saying ‘oh, I’m not going to eat today,’ and the creator liking it, so it pops up at the top.”

Mael argues there isn’t much the platform can do to combat it. “There’s not really a way to stop it, because it’s all

done in the headspace of wanting validation and to create competition,” She said. “I think it’s important to know that when you see things like that it’s so glorified and it’s made to look so good and there’s so much torment behind it that’s kind of not showing.”