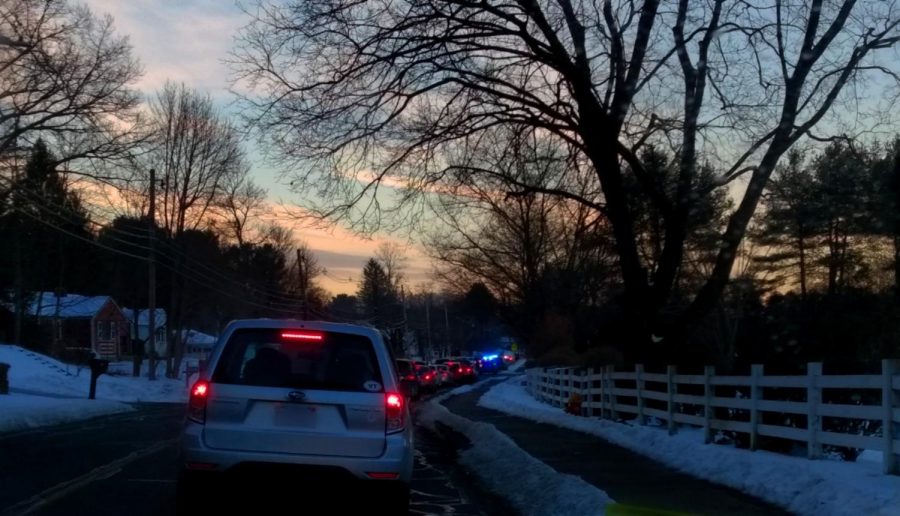 A minor car accident in front of Hudson High School caused a delay for students entering the school today, making some students late for their first block class. No serious injuries were reported.

Approximately at 7:15 this morning, traffic backed up on both sides of Brigham Street. A line of cars transporting students, parents, and staff extended from the school to The Elks.

“I was sitting in the senior lot and watched it happen. It seemed like a little fender bender, just a little tap tap. But when the fire truck and four cops came, I got out Snapchat,” said Melvin. He witnessed Vice Principal Dan McAnespie coordinate at the front entrance. Managing the traffic made the process even longer as the vehicles were blocking both entrances.

“We waited for like five minutes, but then my mom turned around and dropped me off in the junior [parking] lot and I walked down to the school,” said eighth grader, Sofia Olivera.

Senior Mia Michaeil was also affected, “I didn’t see anything but was already running late and the traffic made it worse.”

Oliveira continued, “I was stressed because math was first and I came in late. I had to do my ‘do now’ really fast”

Once the accident was cleared and all the students had been dropped off and traffic resumed, Principal Jason Medeiros sent out an email reassuring parents, students, and staff that the accident was minor.

Medeiros also mentioned in the email that he “very much appreciates the public safety officials who arrived to support the drivers,”

He further stated that all students had been excused from any tardies caused by the delay.

Eighth grader Lauren Shurling, who was stuck for about 10 minutes and arrived at school with a teacher, had a feeling the attendance wouldn’t be an issue but was concerned about the drivers.

“I’m glad no one was hurt,” Shurling said.

Eighth grader Gianna Forester echoed Shurling’s sentiments. “I was really worried that someone was hurt.”