The Importance of Being Earnest Still Relevantly Humorous 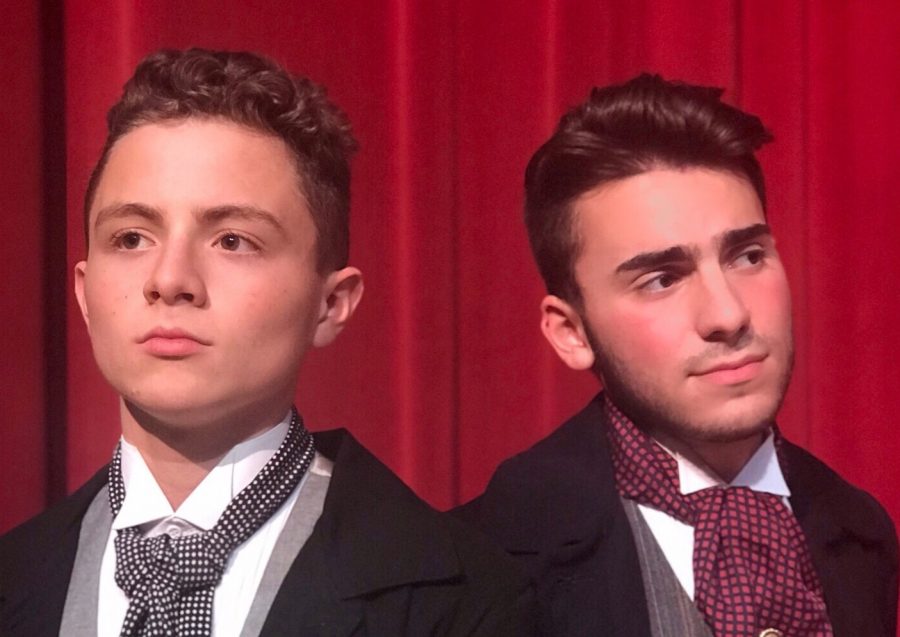 I have enjoyed watching Hudson High plays ever since I was little, so my expectations were high and I was excited to see the show. Although I wasn’t sure what to expect of the story itself, because I hadn’t seen any school play adaptations which were originally written in another century. However, when I saw the play on opening night, I was thrilled that the production lived up to the standard of the great execution of the trivial comedy originally written by Oscar Wilde.

“The Importance of Being Earnest”, set in London in the 1800s, describes the lives of two high-born friends, Jack Worthing (Benjamin Carme) and Algernon Moncrieff (George Sachs-Valor) who create alter-egos named Earnest to capture the hearts of the women they love.

However, their lies catch up to them and secrets are revealed when their fiancees, Gwendolen Fairfax (Julia Terra-Salomão) and Cecily Cardew (Kaleigh Brennan) get together and catch them red-handed in their lies.

Each actor brought something different to the production. Carme, who played Jack Worthing/Earnest, perfectly embodied the humorous and respectable character right down to the British accent. Jack Worthing was an awful liar, and Carme made that clear by inserting the right amount of pauses and stammers to show that. This addition made the play funnier, and they could not have selected a better actor for Jack. I also enjoyed Brennan’s performance of Cecily Cardew; her ability to capture the sassiness of her character made the play funnier and more enjoyable. Her mannerisms and facial expressions while performing were perfect for the scenes, and you couldn’t help but watch her reactions even if she wasn’t the person speaking at the time.

The HHS students made the humor in the play more relatable to a high-school audience, while still staying true to the original story and era in which it was written. For example, it was added in that Sachs-Valor would eat sandwich after sandwich and then ask his butler where the sandwiches he ordered were once guests had arrived. He and the other actors executed the humor while still maintaining the proper language and behavior of the Victorian period, which made it all the comical to watch. The irony of the production that Wilde intended was clear as day in the HHS production.

The props were minimalistic, yet they provided a visual to enhance the audience’s experience. The chairs in which Jack and Algernon sat intensified the importance of their shared conversations. The flowers in the garden and references to a painted peachtree made the audience more aware of the setting, whether it be in the city or the country, depending on the scene. Although there weren’t many props, I didn’t feel like I was missing anything.

Overall, I was surprised by how much I enjoyed watching “The Importance of Being Earnest” though I am not yet familiar with the works of Oscar Wilde. It was a great rendition of the original story, and everyone in the theater could appreciate it, both adults and kids. Though I am not usually a fan of theater, I was hooked on the story and wanted to find out what happened next. I would recommend this show and look forward to seeing more Hudson High plays in the future.