Ultimate Frisbee Takes On Another Year 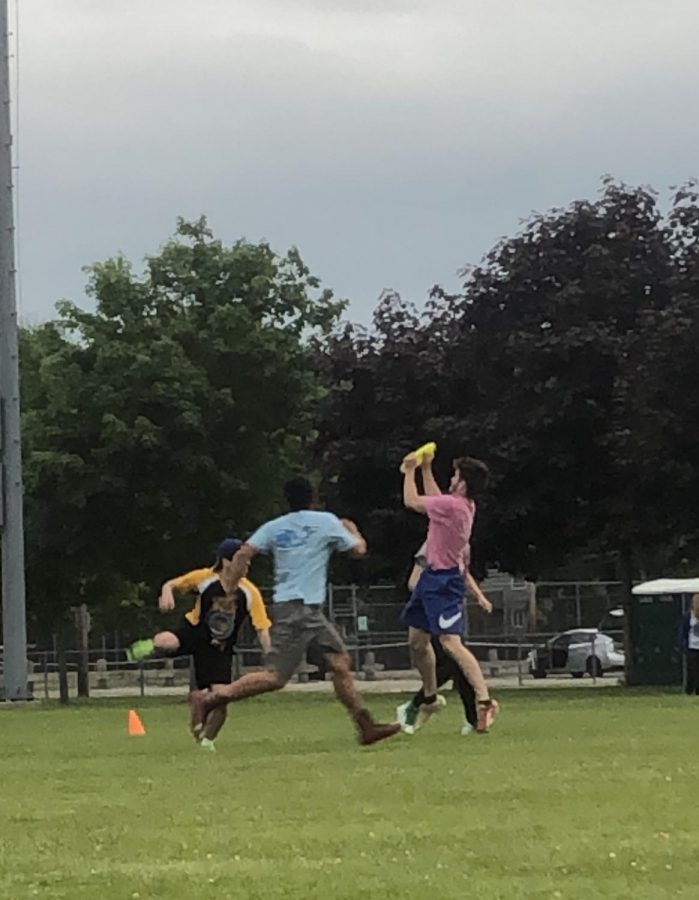 As spring begins, so does the ultimate frisbee season. On its third year of being a club, the team has high hopes of making a come back on the field while still keeping a fun, welcoming environment.

Junior George Sachs-Walor who is in his third season of playing frisbee explains that  “[The team] had a bit of a rough start this year, but I think we can get it together, it’s still early”

The team has also gotten a new coach this year, Coach Jerry De Zutter. Although this may be De Zutters first time coaching ultimate frisbee, he has coached basketball, baseball, softball and soccer and also played ultimate frisbee for 10 years. De Zutter decided to coach when he found out the team was looking for a new coach.

“What I love about the sport is that it involves elements from a bunch of sports, it combines elements of soccer, basketball, football, and even hockey. So the difference is that I am teaching the concepts associated with all of those sports into one sport,” De Zutter said.

Having a new coach comes with a new coaching style which can sometimes be a difficult switch for some player but senior captain JP Bobe, who has been playing for three years feels that so far the coaching has been going great.

“Coach De Zutter has done a great job fitting in and helping us figure out everything and get this season going” J. Bobe explains

Some players have been playing frisbee since the club first started, three years ago but some are just starting now.

Sophomore Ariel Bobe, who is playing ultimate frisbee for her first time this year is also the only girl playing for the Hudson team says that she feels playing has helped her step out of her comfort zone.

“Being the only girl on the team I have really stepped out of my comfort zone and made friends that I probably wouldn’t have made if it wasn’t for ultimate” Ariel Bobe said.

Most of the players can agree that the sport has positively affected their life.

“It’s been a big part of my life during, the school year, and I have met some people I otherwise wouldn’t have spoken too,” Sachs-Walor said.

JP Bobe explained how anyone, no matter their athletic ability or experience can come out, play and have a great time.

“Spring is a great time for athletics and frisbee is by far the easiest to jump into. We always get new people and the sport is not that hard to learn,” JP Bobe expanded, “You could go hard and have a ton of fun or just check the sport out and still have a lot of fun.”