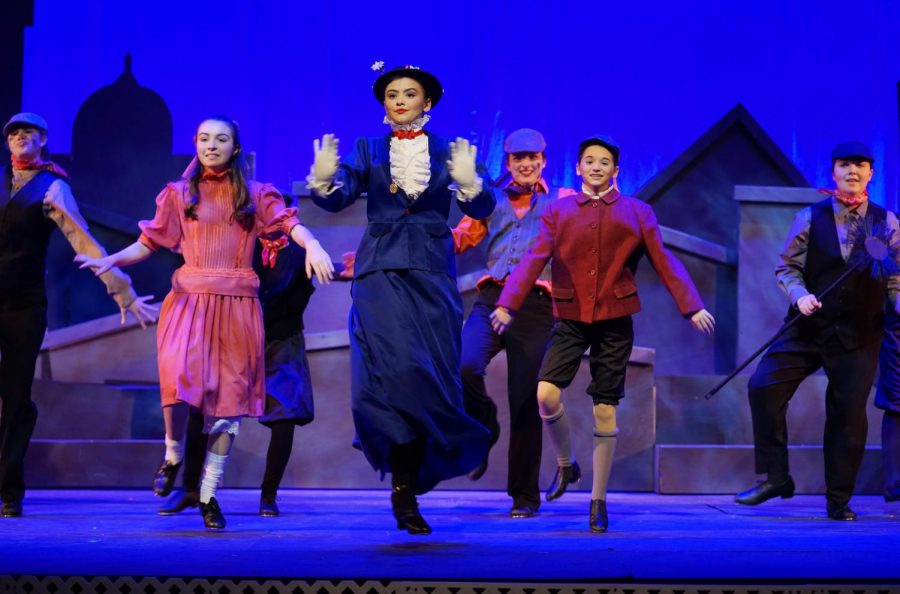 The ensemble and Usher tap through the number "Stepping Time" in March production of Mary Poppins.

Mary Poppins made its debut on the Hudson High School stage this March, bringing the classic story of the whimsical nanny to life with its well-chosen actors and astonishing acting, singing and dancing.

Based on the 1964 Disney movie, Mary Poppins tells the story about a family living in London and their nanny during 1910. The dad constantly works at a bank, a suffragette mother fights for the rights of women but cannot control her two mischievous children or keep a nanny long enough before she quits out of frustration.

In an attempt to hire a more stable child caregiver, women line up for the job, bu they are blown away from a high wind (something they couldn’t recreate on stage) when Mary Poppins flew down from the sky with her iconic umbrella and an unusually large handbag.

In 2006 the movie adaptation made its debut on Broadway

The choreography from dance numbers, some from the original Broadway production was amazing and whimsical as the moves were accentuated by the vibrant and eye-catching costumes and props.

The amazing costumes, all of which were decked in bright, unique colors, which covered their clothes and wigs.

The set accompanied this with a colorful set and dramatic rainbow lighting.

Although most of the cast had not tap danced before, you could never tell the difference between original Broadway stars who tapped across the stage.

This reflected as the trained actors Steffanie Leigh (Mary Poppins) and Nicolas Dromard (Bert) mirrored Usherwood and Burke as they took on the much smaller stage.

Then the cast performed to the song Down the Chimney. The number had good dancing and amazing magic. In the number, two chimneys took the stage which many cast members traveled through.

Overall the show was similar to the movie. Despite it being live and unaided by the movie magic, the production captured the feel of the original classic, with toys jumping out of doll houses, lamps coming out of small bags and people jumping down chimneys.

If you were lucky enough to see it, the show put a memorable pep in your step.